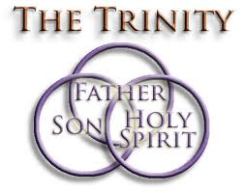 When is the last time you heard a message on the importance of the Trinity? The Trinity is one of the cornerstone doctrines of the Christian faith. The teaching of the Trinity is one God in three eternal coexistent persons: The Father, the Son and the Holy Spirit. The Bible teaches God as one God (Deuteronomy 6:4), but then speaks of three Persons—the Father, the Son, and the Holy Spirit (Matthew 28:19). While the Bible clearly teaches that there are not three Gods, but one true God, the Scripture also teaches that there are a plurality of persons in the Godhead. How to harmonize these two truths is inconceivable to the finite human mind.

One sees clearly the Trinity in Jesus’ baptism: Matthew 3:16-17,  As soon as Jesus [the Son] was baptized, he went up out of the water. At that moment heaven was opened, and he saw the Spirit of God [Holy Spirit] descending like a dove and alighting on him. And a voice from heaven [the Father] said, “This is my Son, whom I love; with him I am well pleased.”

As one reads the Epistles of Paul it is clear he was Trinitarian. It becomes evident by reading the epistles of Paul that the Trinity is indeed the unity of three persons in one, the Father, the Son, and the Holy Spirit. Three times we find Paul using the term Godhead (Acts 17:29, Romans 1:20, Colossians 2:9), a term of reference to God’s trinue nature. While the truth of the Trinity can be discovered throughout Paul’s writings, when one reads his masterful and majestic letter to the Romans one clearly sees the nature of the relationship between God the Father, God the Son and God the Holy Spirit. In the first four verse of chapter one of this magnificent epistle, Paul refers to all three. This is one of the mysteries that makes God such a Holy Triune Being, as throughout Romans the work of the all three are interwoven in the redemption story. Neither God the Father, God the Son or God the Holy Spirit can be taken out of the salvation equation.

First John 5:7-8 is more than clear in regard to the Trinity: For there are three that bear record in heaven, the Father, the Word, and the Holy Ghost: and these three are one. Never a more concise verse can be found regarding God’s trinue nature. (See endnote)

In Trinitarianism, God is one being who reveals Himself in three eternally co-existing persons. The doctrine of the Trinity is important because it describes the very essence of God which is beyond our limited intellect. When one attempts to understand that which appears unfathomable to one’s limited knowledge, one may conclude such harmonization is untenable. But Scripture is plain: God exists in three co-eternal, co-equal Persons. The fact that the Trinity is difficult for our minds to comprehend is evidence of its truth, for if we could fully understand it, it would lend credence against our Triune God’s transcendence and His “wholly otherness” (Isaiah 55:8-9).

One of the first heretical views that arose in the early church dealt with an attack on the Trinity. It was called Sabellianism. While the seeds of the heretical teaching began to be sowed soon after the close of the canon, the third-century Roman teacher Sabellius is credited with propagating the view. Before defining Sabellianism, which is better known as Modalism, second and third-century church leaders like Tertullian (160–220), Origen (184–254), Dionysius (3rd century), and others clearly denounced it. In the fourth-century the Councils of Nicaea (325) and Constantinople (381), denounced Modalism as falling outside the boundaries of biblical orthodoxy.

What is Sabellianism or Modalism? Sabellius taught that those who embrace the Trinity are teaching three gods. Modalism contends that God is a single person who throughout history has manifested Himself in three forms or modes (thus, Modalism). Stephen Nichols writes: “[Modalism is a] heretical view that denies the individual persons of the Trinity. It views biblical terminology of God the Father, the Son, and the Holy Spirit as merely modes of existence or manifestations of the one God… [Sabellius] held that there is one God who can be designated by three different names— ‘Father,’ ‘Son,’ and ‘Holy Spirit’—at different times, but these three are not distinct persons. Instead they are different modes of the one God. Thus, God can be called ‘Father’ as the Creator of the world and Lawgiver; he can be called ‘Son’ as God incarnate in Jesus Christ; and he can be called ‘Holy Spirit’ as God in the church age” (Nichols, For Us and For Our Salvation: The Doctrine of Christ in the Early Church, IL: Crossway, 2007, 153, 235-236).

So, according to Modalism God first manifested Himself in the mode or role of the Father in the Old Testament. In the incarnation the mode God manifest Himself was the Son. After the Jesus’ ascension, the mode God manifest Himself was the Holy Spirit. These modes are never simultaneous…the Father, the Son and the Holy Spirit never all exist at the same time. Thus, God the Father, the Son, and the Holy Spirit are all the same person, just playing different roles or in different modes or forms. Once God manifests Himself in a new mode, the old mode no longer exists; or in other words, when God existed as Jesus, God the Father was no longer existing. Modalism denies the distinctiveness of the three persons in the Trinity, God is one person and has merely manifested Himself in the three modes at various times. Modalism undermines the Scriptural teaching that God never changes (Mal 3:6: Jas 1:17) as it portrays a God who changes his modes. Without doubt Modalism denies the Trinity.

Truly the Athanasian Creed is masterfully written in its defense and explanation of the Trinity. While today there are some groups within Pentecostalism, such as United Pentecostal or Oneness Pentecostalism, United Apostolic Churches and a few leaders within the Prosperity Gospel movement that adhere to Modalism, to hold to the heretical view presents serious problems. A person’s view of Christ cannot be divorced from one’s view of the Trinity. Modalism is considered heresy because it necessarily means that Christ did not actually become incarnate, but God only assumed the mode of Son. Modalism undermines the mediatorial work of Christ, as the Scripture teaches that Jesus is the mediator between God and man (1 Tim 2:5). The Scripture is clear that the Father sent the Son and the Son sent the Holy Spirit, all three are co-eternal yet One (John 10:3). In unity the Triune God brought about the unfolding of the plan of redemption in unity. One who denies the Trinity and embraces Modalism ignores the clear teaching of the Bible.

The truth of the Trinity is seen from the first verse in the Bible until the last chapter of the Bible. In Genesis 1:1 we read, “In the beginning God created the heavens and the earth.” The word God in Hebrew is Elohim, which is used some 2,600 times in the Old Testament. Elohim is a masculine plural noun for “gods.” In Hebrew, the ending im indicates a masculine plural. In the very first verse in the Bible we see the Trinity. The Creator (Elohim) is one God in three eternal co-existent persons working in unity to create. All three persons of the Godhead were eternally at work simultaneously, in unity as One.

It has already been pointed out we see the witness of the Trinity at Jesus’ baptism. As well, Trinitarianism is clearly found in the writings of Paul and John. And in the last book of the Bible we see the Trinity — Revelation 22: God (v. 1, 3, 9); Jesus (1, 3, 12-13); Spirit (v. 17). From the first verse in the Bible until the last verses of the Bible the work of the Triune God is interwoven throughout the Sacred Text. Before creation our Triune God inhabited eternity and when earth and time merge into the eternal kingdom our Triune God will continue to inhabit eternity; the glory equal, the majesty co-eternal, yet One.

While there will always be an unexplainable mystery surrounding the Trinity, to deny it finds one straying from the clear teaching of Scripture. It has been said that in one’s attempt to understand clearly everything about God’s personhood it is possible to lose one’s mind, but to deny the clear teaching regarding His personhood one is in danger of losing one’s soul! This writer is most thankful that our God is bigger that our feeble minds can explain or comprehend. In the Old Testament one of the names given to God was El Shaddai, translated “God Almighty” or “Almighty God,” meaning the All-Powerful One. And that He is! As the first verse of the song “Holy, Holy, Holy” reads, let us sing:

Endnote: While I John 5:7-8, known as the Johannine Comma, gives clear support for the Trinity, it must be noted there are notable scholars who argue the verse is not genuine to the original text having been inserted by well-meaning copyists to support the teaching of the Trinity. It is not this writer’s purpose to address the issue here, but suffice it to say there are equally notable scholars (e.g., Johann Bengel, John Fell, Edmund Calamy, Matthew Poole, John Gill, Charles Foster, John Wesley, John Calvin, Edward Hills) who argue convincingly for its authenticity. This writer has no hesitation of referencing the verse, believing it to be part of the Inspired, Sacred Text. But even without I John 5:7-8, the Bible clearly teaches the truth of our Trinue God. (It is the contention of this writer that if divine providence has not ensured the Scripture has been kept pure in all areas, how can one be assured another inauthentic passage hasn’t “slipped” into the Bible!) If one was to exclude I John 5:7-8, in I John chapter 4 John repeatedly makes reference to God the Father, God the Son, and God the Holy Spirit; God in three persons yet One.