Memorial Weekend has arrived and Memorial Day is Monday. There are several stories on how Memorial Day actually began. More than a few cities claim to be the birthplace of the now national holiday. One of the first observances in honoring the war dead occurred in the southern state of Mississippi. 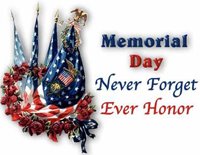 On April 25, 1866, in Columbus, Mississippi, a group of women were decorating the graves of Confederate soldiers who had fallen in the battle of Shiloh. A grief-stricken mother, after decorating the graves of her two sons who died fighting for the South, walked over to two mounds of dirt at the corner of the cemetery to place flowers on the graves of two Union soldiers. As she respectfully placed the flowers on the barren graves, someone said to her in a rebuking tone, “What are you doing? Those are the graves of Union soldiers.” Responding in a voice filled with compassion and sympathy, the mother softly stated, “I know. I also know that somewhere in the North, a mother or a young wife mourns for them as we do for ours.”

Such a loving act of kindness was one of the seeds that were planted in the soil of a fractured nation that grew into what became known as Memorial Day. In May of 1868, three years after the Civil War ended, Decoration Day was observed when flowers were placed on the graves of Union and Confederate soldiers in Arlington National Cemetery. General John Logan stating, “Let no neglect, no ravages of time, testify to the present or to the coming generations that we have forgotten as a people the cost of a free and undivided republic.”

Each year afterwards more and more states recognized Decoration Day, honoring all those who lost their lives in the Civil War. By the turn of the 20th century Memorial Day ceremonies on May 30 were being held throughout the nation. After WWI the day was expand to honor and remember those who died in all American wars. In 1971 Memorial Day was declared by Congress a national holiday, being observed on the last Monday in May.

It is only fitting that on this special day we pause to honor those who have faithfully served our country and the some 1.2 million American service men and women who have died in our nation’s wars. It has been said of those who gave the ultimate sacrifice for their country, “Not only are they commemorated by columns and inscriptions, but there dwells also an unwritten memorial of them, graven not on stone but in the hearts of men.”

Because evil seeks to suppress life, liberty and the pursuit of happiness, freedom always comes at a price. Thomas Jefferson wrote in a letter written to William Stephens Smith, November 13, 1787, “The tree of liberty must be refreshed from time to time with the blood of patriots and tyrants. It is its natural [nourishment].”

Samuel Adams, a Founding Father who helped draft the Articles of Confederation, stated, “The liberties of our country, the freedom of our civil Constitution, are worth defending at all hazards.”

This country just didn’t happen; it began on July 4, 1776 when 56 brave men signed their names to a document known as the Declaration of Independence pledging together their lives that we might have the United States of America. Let us not forget our Founding Fathers sacrifices and those who have served this great country and those who shed their blood that freedom might still flourish.

While it would be more than wonderful if no more wars were fought, we live in a world where liberty must be defended as long as freedom-hating tyrants exist. As Americans we may not always agree with the wars that we as a nation find ourselves involved in, but we must always rally around those who put their lives on the line to keep us free from tyrannical rulers and those who seek to oppress freedom and liberty. These freedom-defending men and women are the real heroes amongst us.

This Memorial Day as we gather with family for cookouts, as we embark upon family outings, as we enjoy the freedoms we too often take for granted, let us pause and give thanks to the Good Lord for all those who have served and those who have sacrificed so much. As well, let us breathe a silent prayer for those serving on foreign soils that are separated from their families that we might be able to be with ours.

May God Bless (and have mercy upon) the United States of America.