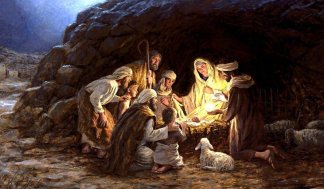 Jesus Christ was born. Now that is worth celebrating!! There are some, though,  within Christendom who oppose celebrating Christmas because as they contend, “Jesus was not actually born on December 25 and the early Christmas celebrations coincided with the pagan winter solstice feast in honor of Mithra, the unconquered sun-god.” The “first” celebration of Christmas (meaning “coming of Christ”) was observed in 336 AD, some twenty-four years after  Constantine, the Roman Emperor, declared Christianity the religion of the empire. Pope Julius I sought to replace the pagan feast with a new feast honoring and celebrating the birth of Jesus Christ, the “Sun of Righteousness” (Malachi 4:2). In the years that followed the Christmas celebration slowly spread throughout Christendom.

I would not spend a minute arguing with someone who wants to object to celebrating Christmas because of its early origin. I personally don’t know anyone who seeks to celebrate the sun-god Mithra, but there are millions and millions of people at Christmastime who exalt Jesus Christ, our Redeemer and Savior. If one fails to celebrate the birth of Christ who is the foundational reason behind Christmas then one truly misses out on experiencing the most wonderful time of the year. It is not important when Jesus was born, but that He was born…and that is worth celebrating whenever we choose to celebrate!

Now the question that I have had asked me many times over the years is, “If Jesus was not born on December 25, when was He born?” Without being dogmatic, let us see if we can deduce an approximate time of Christ’s birth by examining the Biblical record.

If it can be ascertained when Elizabeth conceived John the Baptist, then we can arrive at an estimated calculation for Christ’s birth. The Bible records that Zacharias, Elizabeth’s husband, was informed by the angel Gabriel that his wife would give birth to a child who would be the forerunner of the Messiah. Zacharias, a priest, was ministering in the Temple when the angel visited him (Luke 1:8, 24-26). Luke 1:5 tells us that Zacharias was a priest of the division of Abijah. It is discovered from First Chronicles 24,  the Talmud, Mishnah, and other Jewish sources that the division of Abijah served the second half of the fourth month of the Jewish religious calendar, which began in March with the Passover. This then would have been in mid to late June when Elizabeth conceived John the Baptist.

Luke goes on to record that it was six months after Elizabeth became pregnant with John the Baptist (June) that Mary was informed by the angel Gabriel that she had been chosen to give birth to the Christ Child (Luke 1:31, 36-39). So six months later would have been near the end of December when Jesus was conceived by the Holy Spirit in the womb of Mary and when she visited the home of Elizabeth to inform her that she had been chosen to be the mother of the Messiah (Luke 1:36).

So  fifteen (15) months after the conception of John the Baptist, Jesus would have been born. That would have been in the seventh month of the Jewish religious calendar, which would have been in late September. Such a time for the arrival of Christ would have been perfect timing with the most joyous of Jewish feasts, as the end of September was the beginning of the Jewish Feast of Tabernacles. It would only be appropriate that Christ be born at a time that would coincide with such a feast of thanksgiving and joyous reliance upon God’s grace and watchcare. Did John give us a hint of the time of Christ’s birth?  John 1:14 tells us that the Word (Christ) was made flesh and “dwelt” among us. The Greek word translated “dwelt” literally means He “tabernacled” or “pitched his tent” among us. Jesus came to tabernacle with man. So did Christ’s birth coincide with the Feast of Tabernacles? If so, it would have been a most fitting time. While this timeline some would consider speculation it seems to fit with the biblical record.

Again, the exact time when Christ was born is not important, what is important is that He was born. And in the birth of Jesus Christ the Creator took upon Himself the form of a servant and clothed Himself in human flesh to “tabernacle” among us. His destiny went beyond a wooden manger filled with straw, but a rough wooden cross where He as humanity’s Substitute was nailed… it was there He paid a sin debt that He did not owe but that you and I could never pay.

To the heart that has by grace been awakened to the amazing and marvelous truth of Christ’s finished work on the cross, the joy of Christmas dwells in one’s soul every day. While there was no room in the inn for Christ on the night of His birth, those who have experienced His birth in the inn of their heart can celebrate Christmas daily. While there are those who like to wrangle over the exact time when Christ was born, this I know…He was born and to those who know Him as Savior the joy of the Christmas season can dwell in one’s heart 365 days out of the year!!!