For 40 years I have had the wondrous privilege to help coach high school distance runners. I have seen all types of runners over the years. Some commit themselves to being the best they can be and go on to win many awards and accolades. Some will give a half-hearted effort and achieve some level of success but not what they could have. Some are social athletes who simply come out because they desire to be part of a close knit group. Some will try it for a while and for various reasons quit. Regardless of those I have coached, I trust they all have learned to some degree that the principles of commitment and dedication they gained from running will in the future serve them well in other areas of their lives. 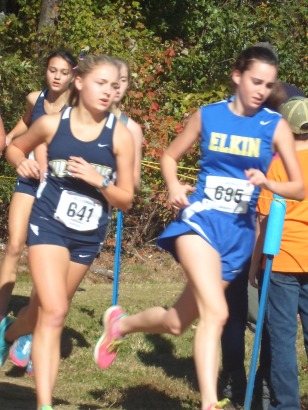 While I think I can recall almost every runner I have ever coached, every once in awhile one will come along that makes a lasting impression upon me because they exhibit a character, attitude and that extra “something” that distinguishes them from others. My list of those types of runners has grown over forty years but is still a most exclusive club. As another cross country season has come to a close one young lady whose name has been added to that list is Elkin’s Madeline Carter. On Saturday she ran her last cross country race as a Buckin’ Elk. In the five years I have coached her she has been a consistent example in persistent courage.

I first began working with Madeline in the eighth grade. She showed much promise in winning the Middle School Conference title in the mile. I looked forward to her entering high school. She quickly showed great promise, finishing 11th at the 2011 cross country state championships; only one place from earning All-State honors. It wasn’t long after that it seemed physical misfortune constantly visited her. Over her four years of high school running she has experienced, just to name a few, growing pains that made running at times agonizing, there were stress fractures, hip difficulties, plantar fasciitis, shin splints, anemic, knee problems, IT band syndrome, bursitis, mitral valve prolapse, and no doubt other issues that she never even told me about.

She often suffered in silence. She never wanted to be one to complain, so she often kept these maladies to herself until I would at last ask her if she was ok. She has always been reluctant to say anything as she did not want it to appear she was trying to get out of a workout. While there are those who will complain at the first twinge of uncomfortableness and look for a reason to stop or even quit, Madeline would fight through her myriad of physical ailments and continue to train and race. There was no quit in her.

The cross country season just ended she ran with mitral valve prolpase, which made her feel like she was having a heart attack while running, and with IT band syndrome/bursitis that made her feel at times if her hip was coming out of the socket…but run she did. I saw her run races with one hand on her heart and another on her hip…but run she did. There was never any doubt she would give me her best effort. She was an example of persistent courage.

This fall she played a significant role in leading the girl’s XC team to winning the MVAC Conference Championship and helped the team qualify for the state meet for the third time in the last four years. In her last cross country race Saturday it was obvious she was running in pain with every step she took…but run she did. Nothing could keep her from not running and finishing. Her courage and commitment would not let her do otherwise. While on a slippery and muddy course that made her hip pain worse, she finished like the winner she is. At the finish line we both embraced, both of us shedding tears. They were not tears of what could have been, but what was accomplished because of persistent courage.

In four years of cross country for Elkin High School she was four-time MVAC All-Conference, two-time Midwest All-Region, once All-State, and qualified for the state meet ALL four years. She ends her cross country career as the school record holder for the 5K with a time of 19:39. For four years she has been an example of persistent courage.

Running is a microcosm of life. One’s attitude and reaction to setbacks and obstacles that often occur in sports, is an indicator of how one will react to setbacks that will without doubt occur in future areas of life. And occur they will. One who displays persistent courage in the face of adversity will go far in life and achieve much success.

We can learn a lesson from Madeline’s courageous persistence, never give up no matter the odds against you or how difficult things may look. Persistent courage is the key. Keep working and be determined in your heart that no matter how difficult or high the hurdle we find ourselves facing, with the Lord’s help, we will succeed and obtain victory if we stay “at it” and stay persistent. Persistent courage in the face of detours is the road that will lead to great rewards. Don’t those victories taste sweeter anyway?

Be courageous my friend; don’t give up for rewards await those who are persistent. And I am thankful I know someone who I am privileged to watch set such an example. May her tribe increase.