Not long ago I read an article of a high school senior who got a letter from a prestigious university containing information they had long waited to receive. The letter recipient with trembling hands and pounding heart opened their letter that contained the answer to whether or not they had been accepted to the college of their dreams. As the college bound senior read their letter the answer they had been waiting for was realized. They let out a sigh of relief as the letter informed them they had been ad 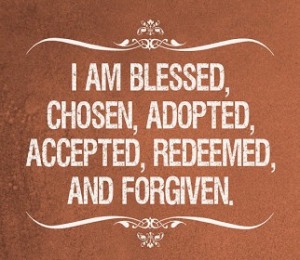 mitted to the university. The positive admission letter was good news to young man who had his heart set on that particular institution of higher learning.

Their joy was short lived. Despite receiving a congratulation letter informing them of their admission, it was a mistake. A computer glitch had resulted that had misinformed the student of their acceptance. In actuality the student was still on the waiting list and had not yet been accepted. Now they will have to wait a little longer before they find out if they have actually been admitted or not. What a roller-coaster of emotions; accepted, not accepted, not sure if they will be accepted.

Let us be thankful that when we by faith in the perfect provision of Christ’s atoning work on the cross are accepted in HIM, there is no chance we will ever be notified that it was all a mistake or we have been turned away. You and I can take comfort in the words of Christ who promises in His letter to us (the Bible), “Whosoever comes to me I will never cast out” (John 6:37). There is no need to fear that He will ever rescind His promise of us being accepted. To reassure us that He will never “unaccept” us the original is in a double negative, “I will never, never cast you out.”

It matters not if it is the Woman at the Well with all her moral failures (John 4), or Nicodemus who was steeped in self-righteous religious works (John 3), Christ pledges to us that He will never reject anyone who comes to Him with a sincere and repentant heart. Christ embraced both with open arms and neither ever had to fear they would be accepted, only to be rejected later.

Paul further reassures us of our acceptance in Christ when he wrote to the Ephesians. Each believer is “to the praise of the glory of His grace, by which he made us accepted in the Beloved” (Eph 1:6). The term “accepted” in the Greek means “to pursue with grace, to compass with favor.” What a marvelous verse as it assures us that everyone who has received God’s grace as found in Christ find themselves “compassed with grace and favor” before the Lord, not as the result of anything we have done but only because of what our “Beloved” Savior did for us.

The wonder of His grace is that in spite of our darkest sins He bids us to come to Him. Christ lovingly issues to us His invitation, “Come unto me all you that labor and are heavy burdened and I will give you rest” (Matthew 11:28). Our acceptance has been purchased and secured by Christ, all we must do is respond to His invitation. We must accept our acceptance provided for us by the Christ of the Cross.

Once we have accepted our acceptance before the Lord it never changes. No Christian is less accepted than another. We are either accepted before the Lord or we are not. Paul tells us we need not ever fear of being “unaccepted” once accepted, “for we have not received the spirit of bondage again to fear, but you have received the Spirit of adoption (Romans 8:15). Under Roman law an adopted child could never be disinherited! Adoption was permanent; one could not be adopted and “unadopted” later. What a wonderful truth to know that nothing “shall be able to separate us from the love of God, which is in Christ Jesus our Lord” (Romans 8:39).

Let us rejoice that no matter who we are or where we find ourselves in life, He bids us to come to Him. No matter our sin, our shortcomings, our struggles, our sufferings, our sordid past, in Christ we will find acceptance in His grace; wherein lies His forgiveness, strength, presence, and resources for daily living.