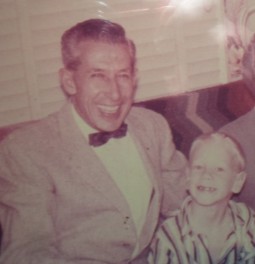 As Father’s Day approaches I pause for a time of reflection. My dad died in 2001, at age 88. I was 49 years old at the time. During those 49 years I never remember my dad saying to me the words, “I love you.” He never said it, but I knew he did. Those three words  did not easily flow from his lips. Born in 1912, he was raised in an era when “real men” had a tough veneer, worked hard, and didn’t utter those words for fear of appearing too “soft.” Did he love me? I never doubted that for a minute. He loved out loud. He showed me love by his actions.

My dad worked hard to make a living and provide for his family. It was his love for his family that motivated him to relentlessly labor to supply for us the necessities of life.

As a boy, when my father was not working, he would take me fishing and hunting. While I was never very good at either, I treasure the memory of those strings of fish glistening in the summer sun, hearing the sound of that covey of quail as they ascended from the thicket, and watching that squirrel jump from limb to limb as I missed my scurrying target.

As a youngster he  showed me how to make rabbit gums so I could catch the fleet footed creatures, which I in turn  sold to a neighbor for fifty cents a piece. He was teaching me at a young age the value of honest work and the satisfaction of earning alittle money on my own.

As a lad some nights bad dreams would invade my sleep and I would wake-up hollering at the monsters that I knew were about to tote me off. My father would come into my room, assuring me they were not real. He would confidently say, “Go back to sleep. Everything is ok. You were just having a bad dream.” With those reassuring words the monsters would vanish for the night.

When I was in the ninth grade I decided to go out for football. After a week of being beaten and bruised from being tackled by huge lineman, I told my father I was going to quit. He offered no sympathy, but firmly and sternly said to me words which still echo in my ears, “No, you are not going to quit. You decided to go out for football and you will follow through with your commitment to the end of the season. You don’t quit something just because it gets tough.” I thought he was being rather severe in his insistence I stick it out, but he was teaching me a valuable life lesson…you don’t throw in the towel because the road gets alittle rough and rocky. His firmness and sternness was actually an act of love in preparing me for the “tackles” experienced in life.

When in high school I ran track. I ran the mile. While my dad worked second shift from 3-11 pm, he would get off work long enough to come watch me when I raced. In my mind’s eye I can see him now standing over by the corner of the bleachers waiting for me to run. Upon crossing the finish line notching another victory, I would glance toward the bleachers and receive from him an approving nod.  I would glance back a second time,  but like a shadow at dusk he was gone. He had gone back to work.

While I did not think so at the time, he showed his love by disciplining me in a place that seemed to have easy access for this long reach. I see now his discipline was for the purpose of “teaching” me to make right choices not wrong ones. Wrong choices can bring hurt that lasts a lot longer than a lick or two on a certain part of the anatomy.

When I graduated from high school I received a partial track scholarship to attend college. I was not sure where the other money was coming from, but my father knew. He went and borrowed the money. I know, for he took me with him when he went to the bank. My dad only finished the ninth grade and he was taking out a loan so I could achieve an education he was not able to receive.

When I graduated from college my father bought me a car and told me he was proud of me. That may have been as close as he ever came to uttering those three words, “I love you.”

When I married he was my best man. As I left the church for the honeymoon he pressed some money into my palm as he firmly shook my hand and said, “Drive carefully.”

My father was a master mechanic. He would always work on my car and check it out when I came home for a visit. Before beginning the journey home he would hand me some money and say, “Get you some gas before heading up the road.”

Through his retirement years he showed that same love to his grandchildren that he showed me. Every time the kids did well on their report cards, he would give them some small gift, usually money, to let them know he was proud of them.

After my mother passed away in 1999, when I would call him to see how he was doing he would always inquire how the kids were doing. And being the mechanic he was, he would always advise me to keep my car in good running condition.

One spring day in late May of 2001, my father, who had lived almost fourscore and ten, stepped into the house after mowing his lawn and fell dead on to the floor he had walked upon for over four decades. Having worked all his life that was the way he had wanted to go.

Do I wish I could have heard my father say, “I love you?” Of course I do, but it doesn’t really matter. I can honestly say it was never an important issue with me. He never said it, but I knew he did. His love was shown by his actions and that was all that mattered.

While every day we should make sure we tell those in our families we love them, but even more importantly may we show them love like my father showed me: loving out loud.

2 thoughts on “HE LOVED OUT LOUD”