Paul, before he departed this world for his heavenly reward, wrote his swan song letter to Timothy, his son in the faith. Timothy was residing in Ephesus, serving as spiritual advisor to those who comprised the church in a city where unrestrained living abounded. Pagan religions flourished, whose major characteristic was gross imm 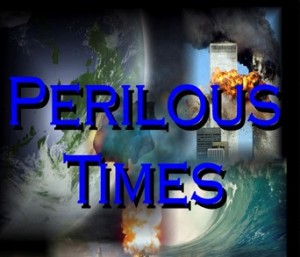 orality, which had become an accepted part of the culture. Paul had organized a church in Ephesus, and Timothy was seeking to bring stability to a church which was being greatly influenced by the culture. The young evangelist was encouraging the church to influence the culture, and not the culture influencing the church. Paul’s letter to Timothy was one filled with encouragement to remain faithful and be courageous in spite of a corrupt culture.

In Paul’s words to Timothy, he warns of a time in the future when times will become so perverted and violent it would make the conditions of Ephesus seem like a Sunday School picnic. Paul writes, “This know also, that in the last days perilous times shall come” (2 Tim. 3:1). Anyone who has not been living in a cave or on a deserted island, knows we are living in extremely dangerous, violent and vicious days. The last couple of decades, times have rapidly grown worse and worse. Evil is rampant. No longer are children safe in school. No longer can one feel safe attending a House of Worship. No longer is a child even safe in their mother’s womb, as abortion on demand is applauded and encouraged. No longer is morally depraved behavior frowned upon, but is embraced as normal. Mass shootings have now become common place, the sanctity of life has been tossed overboard, perverted moral behavior has become accepted as normal. We have become a society devoid of a moral compass and seek to rid society of any reliance upon the God of the Bible.

The conditions of the day have developed quickly over the last two decades, but Paul predicted, through the inspiration of the Holy Spirit, that such times would come in the last days. Let us dissect Paul’s words to get the full impact of the warning issued when he stated, “This know also, that in the last days perilous times shall come” (2 Tim. 3:1).

Paul says, “This know.” The Greek word “know” (ginosko) is in a tense which means that what Paul is writing is something so important that it must be heeded, it must be acknowledged, it must be recognized as something of such vital importance it cannot and must not be ignored. It is critical one listens.

What does Paul want us to know? “that in the last days perilous time shall come.” The word translated “perilous” (chalepos) is only found two times in New Testament. The word was used to speak of words that were harsh, ruthless, and wounding; words that were hard to bear. The word was also used in reference to animals that were fierce, vicious, savage and extremely dangerous. As well, the word was used to speak of an environment beset with high risk or danger. So, Paul is clearly warning that in the last days, before the Lord returns, harsh, vicious, savage, dangerous, ruthless, hard to bear times will be prevalent.

The only other time in the New Testament the word translated “perilous” (chalepos) in 2 Timothy 3:1, is found in Matthew 8:28. The verse reads, “And when [Jesus] was come to the other side into the country of the Gergesenes, there met him two possessed with devils, coming out of the tombs, exceeding fierce, so that no man might pass by that way.” The phrase “exceeding fierce” is a translation of the same Greek word translated “perilous” in 2 Timothy 3:1. The word chalepos is used to picture the behavior of two demon-possessed men, whose actions were fierce, unruly, dangerous, vicious, and made the environment they inhabited beset with extreme danger and high risk. If one reads the whole story in Matthew, those who lived in the area of the two demon-possessed men kept their distance from them because it was too dangerous and too risky to be around them.

It seems clear that Paul was warning us that the time would come when the world would be such a dangerous place to live that each day would carry with it its own risk of survival. One is living in a state of denial if one doesn’t recognize we live in such a world today. Society has spun out of control to such an extent that the harsh reality is that we are living in times that are exceedingly fierce, dangerous, and high risk. It is as if the floodgate of evil has been opened. Yet in spite of the rampant evil of today, sadly, sin creates a deceptive blindness to its destructiveness.

It is no coincidence the Holy Spirit inspired the use of word translated “perilous” in 2 Timothy 3:1 that was used in Matthew 8:28 in connection with demon-possession. This writer believes we are living in times when demonic influenced behavior is being manifested throughout our society. What we are witnessing in our society today goes beyond ordinary “meanness” or moral laxness, but what we are witnessing today is evil and moral depravity that is demonically influenced. We are witnessing before our eyes demonic activity being released that is cruel, vicious, fierce, hard to bear,  dangerous, and destructive. And the Bible warns such evil will only grow worse and worse (2 Tim. 3:13).

Why, though, should we be surprised! When society seeks to defiantly establish a secular and godless society devoid of recognition of a Supreme Law Giver, the downward spiral is set in motion. There can be no moral society without recognition of a Moral Creator; to do otherwise is to sink further and further into moral depravity and the spread of unrestrained chaos. The conditions we are witnessing today, society has invited upon itself. Our ousting of the God of the Bible has been replaced with demonic activity that can only be halted by repentance and a return to the God and Father of our Lord Jesus Christ.

As Christians how are we to respond to the perilous times in which we live? We are not to retreat in fear, but each day we must walk in the assurance that Jesus Christ is Lord. We must rely daily upon His power, knowing that He who lives in us is greater than the power of the devil (I John 4:4). We must seek to be a witness to those in the grip of sin of the redemptive power found in Christ, who alone can deliver one from the sinfulness that pervades the culture. Although the culture around us is sinking deeper into darkness, let us embrace the opportunity to shine the Light of Christ’s redemptive grace, which is able to recuse and deliver those sinking beneath a tidal wave of evil and fear.

In the midst of “perilous” times, hope is found in the Christ of the Cross who, not only predicted such times would take place, but promised when such times come to keep an eye on the Eastern sky….for His Second Coming is drawing near.

One thought on “PERILOUS TIMES ARE HERE”