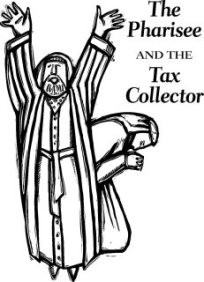 In the Parable of The Pharisee and The Tax Collector (Luke 18:9-14), Jesus teaches us some valuable lessons regarding our attitude towards our own sins and the grace and mercy of God. We see a huge contrast between the Pharisee and the Tax Collector. It is a contrast that serves as a distinguishing difference between those who seek salvation by their own works and those who rest in the grace and mercy of the Lord. You are either arrogantly trusting in your own good works and your own perceived goodness to save you, or you are trusting in the Lord’s mercy and grace to save you. Before delving into the text, Luke 18:9-14 reads:

9 And he [Jesus] spake this parable unto certain which trusted in themselves that they were righteous, and despised others: 10 Two men went up into the temple to pray; the one a Pharisee, and the other a publican. 11 The Pharisee stood and prayed thus with himself, God, I thank thee, that I am not as other men are, extortioners, unjust, adulterers, or even as this publican. 12 I fast twice in the week, I give tithes of all that I possess. 13 And the publican, standing afar off, would not lift up so much as his eyes unto heaven, but smote upon his breast, saying, God be merciful to me a sinner. 14 I tell you, this man went down to his house justified rather than the other: for every one that exalteth himself shall be abased; and he that humbleth himself shall be exalted.

Let us examine in this passage six contrasts that are most evident.

Second, we see a contrast in their Posture in Prayer. Both entered the Temple to pray. The Pharisee proudly stands (v. 11). The word translated “stand” could be rendered “posing himself” for everyone to see. Standing with arms outstretched with palms turned upwards was the ordinary Jewish Pharisaical posture in prayer. His arms were stretched toward heaven with palms turned upward, as he proudly felt he deserved to receive something from God. He, as well, prayed by himself to avoid being “contaminated” by coming in contact with lesser people than himself. The posture of the Pharisee was one of idolatrous pride.

The tax collector, in contrast, standing afar off, would not lift up so much as his eyes unto heaven, but smote upon his breast (v 13). His posture was one of humility. He stood afar off, not because he was fearful he would be contaminated by others, but because he felt unworthy. He was not praying to be seen of others, but to “do business” with God. He didn’t feel worthy to lift his eyes toward heaven, his posture being that of a mourner grieving. His eyes were turned downward and he smote his breast. The posture he took was the custom of one expressing grief.

Third, we see a contrast in the Person to whom they Prayed. The Pharisee “prayed thus with himself” (v. 11). He prayed, so to speak, to himself. It was only a façade that he was praying to God, he was the object of his on idolatrous prayer. His prayer went no higher than the ceiling in the Temple.

By contrast the tax collector prayed to God. The Greek word for God is theos (θεός). He prayed not just to any god, but to the God who became a Man and came to earth as a Babe. We find in Matthew 1:23, “Behold, the virgin shall conceive and give birth to a Son, and they shall name him Emmanuel, which translated means “God (theos θεός) with us.” The Person to whom the tax collector prayed was the One who in Christ became “God (theos) with us.” The Pharisee’s prayer was a humanistic prayer to himself, but the prayer of the tax collector was Christocentric, it focused on One outside himself.

Fourth, we see a contrast in their Pleas. The Pharisee’s “prayer” contained no plea, but was a reciting of all his good works, “I thank thee, that I am not as other men are, extortioners, unjust, adulterers, or even as this publican. I fast twice in the week, I give tithes of all that I possess” (v. 11-12). The Pharisee bragged on his empty ceremonialism.

The plea of the tax collector was simple and to the point, “God be merciful to me a sinner.” He did not appeal to the Lord on the bases of his good works, but he appealed to the Lord on the bases of His mercy (v. 13). He didn’t approach the Living Word with a proud heart like the Pharisee. He was sorrowful for his sin, and saw no good within himself. He had nothing of which to boast; therefore, he pleads for mercy. The Greek word for mercy is hilaskomai (“be propitious to” or “merciful”), and was a word used to refer to atoning blood sprinkled on the mercy-seat in the Old Testament on the Day of Atonement which mercifully appeased or satisfied the holiness of God. The same word (hilaskomai) is used in Hebrews 2:17 where the inspired writer says Jesus came to make atonement (hilaskomai) for our sins. The tax collector cried out, “Lord be propitious/merciful toward me through sacrifice, let an atonement be made for me. I am a sinner and cannot be saved in any other way than by a satisfactory sacrifice offered in my place.” Of course, that satisfactory sacrifice was Christ.

Fifth, we see a contrast in their Plight. The Pharisee didn’t see his plight, that he was a sinner. He was blinded by his pride, arrogance, haughtiness, egotism, conceit, spirit of superiority, and self-righteousness. He saw no need for forgiveness, no need for mercy, and thought he was worthy to come into the presence of God by his own good works and self-righteousness.

The tax collector recognized his plight, he saw and sensed he was a sinner. The Pharisee thought of others as sinners. The publican thought of himself alone as a sinner. The Greek word “sinner” means to miss the mark, and the tax collector knew he had missed the mark and that all have sinned and come short of the glory of God and none were righteous, no not one(Romans 3: 10, 23). He recognized he had failed to comply with God’s holy law, and was unworthy to ever save himself or come into God’s holy presence by his own good works. Like the tax collector, only those who rely upon the substitutionary grace and mercy of God as found in Jesus Christ can find forgiveness. One who doesn’t recognize their plight can never receive or experience Christ’s atoning mercy and grace.

Sixth, we see a contrast in the Pronouncement by Jesus. The Master made a distinction between the two men, “I tell you, this man [the tax collector] went down to his house justified rather than the other: for every one that exalteth himself shall be abased; and he that humbleth himself shall be exalted” (v. 14). We see clearly the reason why the Lord said that the tax collector went down to his house justified (forgiven) rather than the Pharisee – he sought for mercy through an atonement for sin, which was the only way in which God had from the foundation of the world purposed to save sinners (Rev. 13:8).

As the Pharisee depended on his good works and observing the ordinances of religion for his acceptance with God, his inability to comply with the holy and perfect demands of God and his blindness to his own sinfulness, he found himself rejected. Scriptures declare, “All have sinned and come short of the glory of God” (Romans 3:23). The Bible is clear, no man can make an atonement for his own sins, we must take refuge in Him who God’s mercy has provided in Jesus Christ. One who trusts their own good works will find themselves excluded from the kingdom of heaven.

The tax collector knew his need for a substitutionary sacrifice was no new doctrine, it was the doctrine publicly and solemnly preached by every sacrifice offered under the Jewish law. Without the shedding of blood there is no forgiveness, was the loud and constant cry of the whole Mosaic sacrificial system. From this we may see what it is to have a righteousness superior to that of the scribes and Pharisees. To be saved, to have our sins forgiven, to find acceptance in the presence of the holy-love of God, one must humble themselves before the God who has provided atonement in Christ. Christ invites those who, like the tax collector, recognize they are sinners and come before Him with a meek and humble heart, there finding eternal refuge in the perfect provision of the cross.

O, what a Savior!