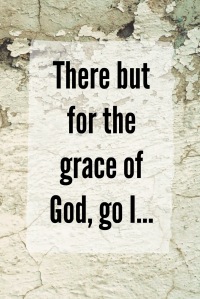 one. There are times such “crossings” leave us scratching our heads asking ourselves if we handled the situation correctly or wisely. I had such an encounter this week where I sought to minister grace as well speak firm, compassionate words of counsel.

Early in the week I received a phone call from a gentleman who poured out a story that as I intently listened, found my eyes welling up with tears. He detailed misfortune that had visited his life, resulting in him living in a motel with his wife and young child and had no money and was about to be kicked out of the motel. I concluded this man was either telling me the truth or he was a good con-artist. I agreed to meet with him and upon doing so it seemed the truth lay somewhere between my two assumptions. Upon inquiring, I was given several reasons/excuses why neither the man nor the woman, though they both appeared capable of doing so, worked or why either have worked in well over a year.

You ask, “How do they survive each day?”

They survive by going from church to church, individual to individual seeking the kind-heartedness of others for money in order to survive…and it seemed their sources of finding people to help them had dried up. Upon agreeing to help the man by paying for a night’s stay, he informed me he had made arrangements for the rest of the week. I encouraged him to find a church home, turn his life over to the Lord and had prayer with him.

Not to my surprise, the next day he called me back with the same story and that he had run out of places that would help him. Being a soft touch, I agreed to pay for him one more night. I then proceeded to speak with compassionate firmness words of counsel that it was time for he and his wife to get a job and quit expecting handouts from others. I asked him if he wanted to live the rest of his life dependent on the hopeful generosity of others, if not… seek a job. I pointed out that next door to the motel was a fast food place with a “help wanted” sign in the window. He didn’t take too kindly to my advice and became agitated at my words. After my firm counsel, I figured I would not hear from him again….and I have not.

My earnest prayers go out to this man and his family…and my heart weeps and prays for others like him….for if not for the grace of God there go I.