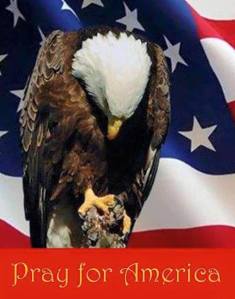 I have a dear friend, She needs your prayers. On July 4th she will celebrate her 239th birthday. I have known this friend all my life, sixty-three years now. She is on life support. Matter of fact She has been on extended life support for some time, but in recent days Her condition has become critical to where I am not sure that She will survive.

My friend was born surrounded by God-fearing men and women who believed in the freedom of the individual spirit, who believed that God granted people certain inalienable rights that allowed them to pursue their dreams. My friend has been a proponent of the idea that the pursuit of happiness are for those with a creative spirit and a willingness to work hard which in turn can open many doors of opportunity.

My friend has sought to exhibit a character that took the moral high ground, believing in the sanctity of life, the sacredness of family, and that marriage was between a man and a woman. She defended those who were victims of injustices and punished those who sought to trample her virtuous constitution.

I have grown-up being proud of Her. Every time I see Her banner gracefully unfurled in the wind I still get a lump in my throat as I think of all those who have defended Her honor. When I hear “Her song” played I stand reverently in thanksgiving for what She means to me and millions more.

Over the years my heart has been broken as the one I honored and loved has grown sick and whose health is rapidly deteriorating. I am not sure She is going to make it. Her once family values have been attacked and thrown to the curve. Her moral foundation is being replaced with the sand of relativism. Her purity has been soiled by those who care not for the Biblical moral values which She has embraced for so many years.

The fundamental historical foundations on which She was built has been shaken to the core. A soul that was once anchored by principles of liberty and constitutional laws has drifted toward the rocky shore of a government of dependence and give-a-ways that threaten to leave Her shipwrecked on the sands of time.

She was once frugal and thrifty; she is now enslaved by foreign lenders because of leaders who have greedily taken advantage of Her financially. Sadly, they have put Her on a train ride that is leading to inevitable financial derailment. It pains me to watch it happen, but the crash is certain.

Once so strong and vibrant with a voice that caused others to tremble when they even thought about encroaching on the freedoms of others, now has been weakened by naïve compromisers who seek to strip Her of Her once military might that have made Her vulnerable to freedom-hating terrorists. Her weaken state grieves the hearts of all who once felt safe under Her mighty wings.

She was the last bastion of democracy, the last hope for those seeking escape from the hands of tyrants and European socialism. Now the influence of those on the radical left with socialistic agendas is molding Her into an image that Her birth-parents fought to never see happen. In recent days I have felt the hot tears of Jefferson, Madison, Franklin, Adams, Hancock, and Henry as the democracy they gave us is becoming a government more akin to a man named Marx.

Some blindly say, “Oh, She is not sick, all is well.” May I say, her banner may still fly in the sky, monuments honoring Her may still dot our landscape, and we may still sing of Her in public gatherings, but She is not the same anymore. Change has occurred. She is on life support and my heart is broken.

She needs our prayers. It is no longer, “God Bless America” – it is now “God Have Mercy on Her.” On this Her birthday, please pray for Her.

One thought on “PRAY FOR MY FRIEND”