We have all heard the statement, “Every person is valuable and every person counts.” That was certainly proved on Tuesday, April 28, 2015, when twelve Elkin girls won the Mountain Valley Athletic 1/A-2/A Conference Track and Field Championship team title held at Starmount High School. It was a gorgeous spring day, with wispy white clouds scattered about a beautiful blue sky. 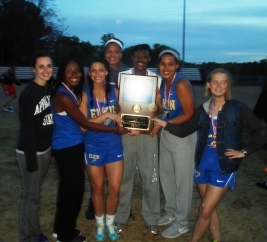 Competing against eight other schools, the team to beat was 2A Ashe County. It is a school that is more than twice the size of Elkin. With only twelve girls every Elkin gal had to do four events and every point was of the utmost importance. Championship meets brings out the best in runners, so everyone from every team was performing at a high level. It means every race is an all-out effort and by the end of the meet you have some very tired girls.

The meet was nip and tuck throughout the whole day. We would lead awhile, then Ashe County would take the lead and then we would take it back, then they would take it back again. You get the picture. Elkin took the lead by 8 ½ points after the 200 meters. There were two events left, the two mile and the mile relay. In the two mile Ashe County picked up eleven points we picked up five points. Our lead was cut to 2 ½ points. After a six hour meet, the winner of the conference championship came down to one race.

What had to happen was simple, because we had a 2 ½ point lead we either had to beat Ashe County or could finish no more than one place behind them. I explained to the girls exactly what they had to do and told them I believed in them and that I had no doubt they would do it in spite of being tired from other races. I told them, “You are not required to feel good, you are only required to run as fast as you can.”

As the 4×400 unfolded it was apparent Ashe was going to get second in the race, which meant we had to finish third. The problem was we were also racing against a time that was run in the previous 4×4 heat run before us. The Elkin girls ran with guts, determination and heart. They gave everything they had. Finishing just behind Ashe in third place, we had to wait to see if our time beat the time from the other heat. It did, by 3 seconds.

We waited for the official announcement. After all the dust had settled, the Elkin girls were announced as MVA Conference Champions by the slimmest of margins.  The final score 128 to 127 ½. We won by ½ a point!!! In four decades of coaching I have been privileged to be on the winning side of  many championships, but I have never been associated with one this close!

Looking over the results after the meet it goes without saying, the effort of every person counted. Every point from every person was as valuable as gold. From those who won getting ten points to those who placed eighth and got one point was valuable beyond words.

Athletics is a microcosm of life. Just as every single person was important in the team victory on Tuesday, so is every person valuable and counts in life. The Lord created us all to make a difference where He has put us. No matter where we find ourselves in life we can make a difference. We were created with value and our lives count. We are not required to do what someone else does, we are required to be and do what He has created us to do with the talents and abilities He has given us. We are to live seeking to make a difference in the lives of those around us.

Like in a race we may grow weary and tired on the race course of life, but let us keep striving to give our best and do our best. That is what constitutes a winner. That is a winner.

After all, we are all valuable and we all count.