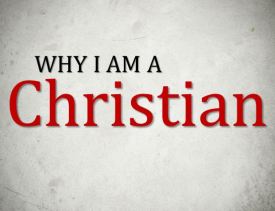 Forty-four years ago this week I trusted Christ as my Savior. I realized I had sinned against a holy God, but our Creator God became the Redeemer of humanity in Jesus Christ. He who knew no sin became sin for me that I might become the righteousness of God in Him. Ah, amazing grace!!

Over the last forty-four years I have been asked many times, “Why are you a Christian?” I will answer that question with a story from the days of the Roman Empire.

There was once a wealthy Roman senator who had become most influential in the political arena. He desired that his only son follow him into politics, but his son was not interested in governmental affairs. His son was more interested in living a life without restraint and indulging in behavior that brought heartache and shame to his well known father.

In time the young man left home with his partying companions to live a life of reckless abandonment. For a while he kept in touch with his father, but as time passed their relationship become more and more strained and all contact was discontinued. That broke the father’s heart, but what could he do.

He continued to faithfully serve as a Roman Senator, but he realized as time passed he would not see his wayward son again. As the wealthy senator grew older he decided to change his will, which had stated everything was to go to his only son. Presuming his son was dead, he rewrote the will and left his vast wealth to his trusty servant who had been with him most of his life. However, he made one stipulation in the will, that if his son ever returned he was allowed to choose one thing from his estate.

Not long after revising his will the Senator passed away. A most influential man, word of his passing spread throughout the Roman Empire. Word of his passing eventually made it to the ears of his son. Heartbroken at hearing of his father’s death, he realized how he had wasted his life and had broken his father’s heart. Repentant, he made his way back home. Upon arriving he was told of his father’s change of the will. He was informed his father’s vast wealth was to go to the faithful servant, but he was allowed to choose one thing from his father’s fortune.

His heart raced as he thought to himself, “What shall I choose?” He pondered and he pondered. Then suddenly, like a flash of light, it came to him what should be his choice. Twirling around and pointing at the faithful servant, the son exclaimed, “I will take him.” For the young man realized that wrapped up in the faithful servant was all that his father possessed and to possess the servant was to possess all that belonged to his father.

That story is the answer to “why I am a Christian.” Forty-four years ago my heart cried out, “I will take HIM.”  For I realized that wrapped up in the Faithful Servant, Jesus Christ, is all the Heavenly Father possesses and to possess Christ is to possess all that belongs to the Father!

For in Christ, the Suffering and Faithful Servant, I discover all my heart longs for. In Him I have found forgiveness for all my sins. He, as my Substitute, paid the sin debt I could never pay and His perfect provision on the cross paid in full the debt owed by all humanity. In Him I have found fulfillment and satisfaction. He gives a peace, purpose and satisfaction this world can’t give, a peace that passes all understanding. In Him I find a Friend that sticks by my side no matter what I go through in life. He never leaves me nor forsakes me. In Him I find a strong tower that I can run to in life’s darkest and toughest hour. In Him I find faith for standing when I don’t understand. Faith means I don’t have to have all the answers, but I hold the hand of One is the Answer when I don’t understand. He is the Rock that holds me up in a world of sinking sand. In Him I have a future hope that is sure. This old life will one day cease, but He has promised, “I am the resurrection and the life. He that believes in me shall never die.”

And in the Faithful Servant is found so much more. All that the Father has for us to experience is wrapped up in Him.  As Paul wrote, “Blessed be the God and Father of our Lord Jesus Christ, who has blessed us with all spiritual blessings in heavenly places in Christ” (Ephesians 1:3). All that the heart longs for is found in Christ. He waits for you to exclaim, “I will take HIM.”

My dear friend, He waits your response. I am so thankful that I responded forty-four years ago to His invitation. The most important words I ever spoke were on that life changing night over four decades ago when I emphatically said, “I will take HIM.”