It was 45 years ago that man first stepped on the moon. I remember as a seventeen year old gathered around the TV with my parents on July 20, 1969, watching the historic moment. As Neil Armstrong made that first step upon the moon by a human being he said, “One small step for man, one giant leap for mankind.” 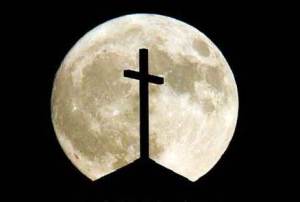 Armstrong’s journey to the moon In Apollo 11, along with fellow astronauts Buzz Adlrin and Michael Collins, took four days to reach the 250,000 mile destination. Twenty minutes after Armstrong made his historic step, his crewmate, Buzz Aldrin, joined him on the moon’s surface. Over half-a-billion people around the world watched spell-bound as the two men spent some two hours bounding in the light gravity, hitting a golf ball, and planting an American flag.

The greatest event, the most unique event in human history was when the Creator of the heavens and the earth stepped from eternity into time clothed in human flesh in the person of Jesus Christ. Christ’s birth, life, death, and His glorious resurrection have left an impact upon human history that time cannot erase, but time only increases. The cross of Christ towers over history as the eternal plus sign of the universe. Christ is to us just what His historic cross and His resurrection is – hope for sinful humanity. All that Christ was in eternity past and eternity present was put into what He did when he stepped foot upon planet earth.

The crowning chapter of Christ’s earthly ministry and his atoning work on the cross was His resurrection from the dead. What His birth promised, the Resurrection declared fulfilled. Christ forfeited His life on the cross, and arose for the dead to give our forfeited lives new life. His conquering resurrection has opened the door to the possibility of new life for all who will enter and receive Christ as their Savior.

The Christian faith is grounded and built upon the truth that God has acted and continues to act in and through the One who died upon the cross and arose from the dead. Christ’s rising from the cold dark tomb is God’s exclamation point and seal of approval on the work of Christ. The two fold act of the cross and the resurrection is, as P.T. Forsyth says, “Our faith’s center of gravity.”

Because Christ arose from the dead all persons by faith in Him are partakers in His victory! His resurrection proves that LIFE, not death, is God’s final word to us.

Oh, let us rejoice – HE IS ALIVE! As a result of the greatest event since Creation, when our Creator in Jesus Christ walked on earth, His resurrection power is ever available to every Christian to empower us as we journey through life.