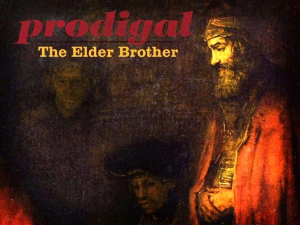 The parable of the Prodigal Son, found in Luke 15:11-32, is one of the most  familiar stories in the Bible. Charles Dickens called it the greatest short story ever penned. The story opens in dramatic fashion,  with a “certain man who had two sons” (v. 11) . The younger son wanted to be free and do his own thing, so he requested his inheritance in advance. He  left his father’s house, and went into the “far country” (v. 13) where he  squandered his inheritance with riotous living. After a time the younger Prodigal finds himself sleeping and eating with the hogs.  He decides to  make his way back to his father, who welcomes him home with loving arms of forgiveness, acceptance and a huge celebration. It is a wondrous story that paints the beautiful portrait of the hope of grace found in God the Father for all who find themselves tired of wallowing in the hogpen of sin.

It would be nice if the story ended there, but there is another Prodigal in the parable who is often overlooked. There is the elder brother found in verses 25-32. And the elder brother may be a far worse Prodigal. The verses read: “Now his elder son was in the field: and as he came and drew nigh to the house, he heard music and dancing. And he called one of the servants, and asked what these things meant. And he said unto him, Thy brother is come; and thy father hath killed the fatted calf, because he hath received him safe and sound. And he was angry, and would not go in: therefore came his father out, and intreated him. And he answering said to his father, Lo, these many years do I serve thee, neither transgressed I at any time thy commandment: and yet thou never gavest me a kid, that I might make merry with my friends: But as soon as this thy son was come, which hath devoured thy living with harlots, thou hast killed for him the fatted calf. And he said unto him, Son, thou art ever with me, and all that I have is thine. It was meet that we should make merry, and be glad: for this thy brother was dead, and is alive again; and was lost, and is found.”

Now there is no question the younger son was an outward Prodigal. He had been outwardly defiant, rebellious, disobedient and thoughtlessly wasted what his father had given him. But he eventually came to himself, and limping back to his father’s house on the jagged pieces of his broken life, was met by unconditional love and grace, being restored to fellowship. But the elder brother was a Prodigal, too…. an inward Prodigal. He got mad when his father accepted his brother back with grace and forgiveness. The elder brother never left the father’s house, but in his heart and attitude he, too, dwelt in the “far country.”

He was an inward Prodigal in at least six ways.

(2) He was Prideful. He thought more highly of himself than he ought. He thought his good behavior and works earned him favor in his father’s eyes. He failed to realize any favor he had with the father was based on his father’s love for him not his prideful works and attitude. He labored for the father not out of love but out of duty. There was no joy in is labor, but drudgery. A joyless Christian is never productive for the Father.

(3) He was Pharisaical. He had no room for grace or forgiveness for his brother. He was legalistic and harsh in his treatment of his brother, and no doubt others who didn’t live up to his perceived standards. We are too often harsh in extending grace to others who have “messed up” and while we expect others to forgive us when we do,  we find it difficult to forgive in like manner.

(4) He was Pompous. He looked down his nose at his brother, he was arrogant, had an attitude of superiority, and his acceptance of his brother was conditional on how his presence benefited him. We all are in need of God’s grace; therefore, no one is superior to another. An old Jewish proverb states, “We all come from dust so no one can say they come from superior stock.”

(5) He was Presumptuous. He presumed the father couldn’t do without him. He thought he was God’s gift to his father instead of realizing it was the father’s favor that had been gifted upon him. We make a mistake when we presume God just can’t do without us and He  is “lucky” to have us serving Him. That God even wants to use us should cause us to humbly bow before Him in grateful worship.

(6) He was Prating. Prating is a word we don’t use anymore but applies to the elder Prodigal. Prating means to talk foolishly, to run off at the mouth. The elder brother accused his brother of actions not supported by the story, he accused him of being with prostitutes but the text doesn’t say that (v. 30). He was running off at the mouth without having all the facts. The elder brother was overbearing in his words and attitude.

As can be seen, the elder brother was a Prodigal, too…inwardly. While we know the younger Prodigal was restored to fellowship with his father, the story ends with no hint of change in the elder Prodigal’s heart and attitude. As we reflect upon this masterful and impactful story told by Jesus, what kind of prodigal are we? Are we one who is a Prodigal outwardly or inwardly? Whichever one we are, we need to repent and make our way to the Father. He will run to meet us with open arms of loving forgiveness, and with fellowship restored the wondrous music of His grace will fill our hearts with joy.