In First John the Beloved Apostle writes to his readers that they have “overcome the wicked one” (I John 2:13, 14). He proclaims that Christians are overcomers! What did John mean when he used the word “overcome”? The Greek verb “nikao” (νικάω) is packed with abundant meaning. “Nikao” was a favorite word of J 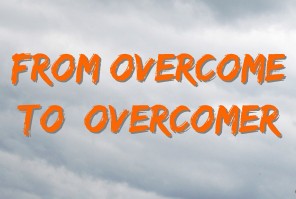 ohn, the Apostle using it once in the Gospel of John, six times in First John, and seventeen times in Revelation. The word denotes “a victor, a champion, a conqueror, one who subdues another, a winner.”  The verb “nikao” was used in a variety of ways. It was used to describe an athlete who had gained the mastery over all competitors in his sport and was a champion. The word was used to refer to a military victory of one foe over the other. It was a most picturesque word painting on the canvas of one’s mind of a triumphant general standing on the neck of the one he had conquered as a sign of victory.

So, the Greek verb nikao was used athletically and militarily to depict the absolute crushing of a competitor or an enemy. Wrapped up in the word “nikao,” translated in our English Bible as “overcome,” are the words “to conquer, to prevail, to subdue, to defeat, to master, to overcome, to overwhelm, to surpass, or to be victorious.”

It must also be noted that in First John 2:13,14 the word translated “overcome” in the Greek is in the perfect tense. The perfect tense describes an action which has been completed in the past but continues to have an ongoing effect in the present and will continue to have an effect into the future. In other words, John is speaking of a continuous and ongoing victory. Where does this ongoing victory come from? How is it possible to have this kind of victory?

Our victory lies in abiding in our Great Commander, Jesus Christ, who conquered sin, the devil and death! John uses the word “abide” twenty-three times in his five-chapter epistle. The word abide, from the Greek word “meno” (μένω), denotes “to stay, to dwell, to remain, to abide.” It denotes to continue dwelling, remaining, staying where you are and not wandering off. In John 15:4 Jesus says we are to abide in Him like a branch abides in the vine. Abide pictures a close, intimate relationship and emphasizes the need on our part of maintaining continual fellowship with the One who has overcome all foes (I John 2:6, 24, 27, 3:6).

Christ used the word “overcome” when He spoke to all seven churches in the book of Revelation. They were all called to be overcomers (see Revelation 2:7; 2:11; 2:17; 2:26; 3:5; 3:12; 3:21). He calls us to be overcomers, living our Christian lives from the position of victory which He won on our behalf. Jesus calls us to be overcomers because He was an Overcomer. In Christ is found all we need to be overcomers in this life. He has supplied us with His Holy Spirit, His Word, fellowship with other believers, prayer, worship, and placed in our hearts the assurance of eternal life. As we abide in Him (John 15) we experience His victory, which is our victory, too. Again, in Christ we don’t fight for victory, our Christian life is lived from the position of victory. As Christians we are to abide in the victory which has already been won for us in Christ.

Yes, the “wicked one” may come against us, circumstances may sometimes be contrary to us, but in Christ we are overcomers. In Christ the victory has already been won whereby we too can enter into that victory which He has provided for us in Himself. Don’t be overcome, be an overcomer!