It is realized that when the subject of Eternal Security is discussed, two camps quickly pitch their tents and draw lines in the sand. One camp passionately embraces eternal security, while the other camp contends one’s salvation is conditional and can be lost. While I am in the camp of those who embrace eternal security, it is recognized good brothers and sisters hold to a different position. But standing upon 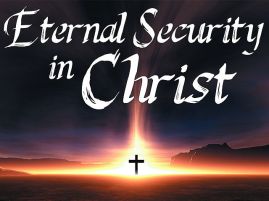 the holy mountain of biblical truths I view eternal security as a truth that sparkles like a glimmering diamond kissed by the light of heaven’s scriptural light. For one to contend that one can lose their salvation, in the end logically implies: (1) salvation is not by grace but is works-based, salvation being ultimately based on one’s actions not God’s unmerited favor, and (2) Christ’s death on the cross was not sufficient to save without our works, our works bringing the salvation process to completion. One who contends it is possible to lose one’s salvation cannot affirm salvation is by grace (which means without any admixture of human contribution), then in the next breath contend our salvation is conditional by that which we must do.

When Jesus cried out on the cross, “It is finished” (John 19:30), it was a cry that excluded our works as needed for salvation. It was a cry of completion. In the Greek Jesus’ declaration is one word, tetelestai, which means “paid in full, the debt has been paid, complete.” It was used by merchants to indicate that a receipt had been paid in full and nothing more was owed. Tetelestai was a word used by authors, artists, or mathematicians to declare their work was complete and finished, nothing else needed to be added. As well, according to Roman law if a person was convicted of a crime, a certificate of debt was prepared which listed his offenses and the prescribed penalty. This would be nailed to the door of his cell until the day when, having paid his debt in full, he was released. The magistrate would then take this paper and write tetelestai across it, denoting that justice had been satisfied in full and the person would never have to pay that debt again. Jesus’ use of the word clearly implies that His payment for our sins was sufficient and our salvation has been paid in full, was finished and complete. No “work” of humanity can add to the sufficiency of what Christ accomplished. As well, the Greek word tetelestai is in the perfect tense, which describes a completed action which produced results which are still yielding results in the present. The perfect tense carries two ideas: (1) completed action and (2) continuing results. In the word tetelestai Jesus was declaring the atonement has been accomplished, completed once and for all time and its sufficiency is still having an effect in the present. Christ death on the cross forever secured our salvation, apart from any works of humanity. Through His atoning work on the cross, Christ “became the author of eternal salvation” (Heb. 5:9).

Before examining four key scriptures that shine like bright stars in the heavens in regard to the matter of eternal security, four objections raised by those who oppose eternal security will briefly be considered.

(1) It is contended that those who hold to the doctrine of eternal security open the door to the promotion of sin or that it gives one a “license” to sin and live as one pleases. Eternal security is not a license to sin. Paul warns that such an attitude should “perish” from the thinking of a Christian (Romans 6:1-2). A person who thinks eternal security is a license to sin either has a lack of understanding of salvation or has never been saved. A person who has truly been redeemed by Jesus Christ will not intentionally live a life characterized by continuous and willful sin. Christ came not to save us in our sin, but to save and deliver us from our sin (Romans 6). A true understanding of eternal security promotes faithfulness not faithlessness.

(2) A second objection to eternal security has to do with verses that appear to speak of salvation being conditional or contingent upon our works and “warning” passages that exhort the Christian to continue in the faith. In other words, the security of one’s salvation is conditional. However, there must be a distinction drawn between what an individual must do in order to receive salvation and how as a Christian one should live. Works or fruit are the proof we are one of His and we are connected to the Vine (John 15). Our fruit doesn’t secure our salvation, but our fruit is evidence we are secure in Christ. While there will always be a mystery and a tension between the sovereignty of God and the responsibility of man to exhibit fruit that gives evidence of salvation, “warning” passages exhorting the Christian to continue in the faith are for the purpose not to take our salvation for granted but to continue bearing fruit for the Savior whereby making our “calling and election sure” (2 Peter 1:10).

(3) A third objection to eternal security has to do with those who have given outward evidence of salvation, but have now “forsaken” the faith once delivered to the saints. One is to never judge the truths of the Word of God by someone’s experience, but we are to judge one’s experience by the Word of God. John states, “They went out from us because they were not of us” (I John 2:19). Peter stated, “A hog returns to his wallowing in the mire and a dog returns to his vomit” (2 Peter 2:22). Those who appear to give evidence of faith, but later abandon the faith are only revealing their true character. Hogs eventually make their way to a mudhole because they have the nature of a hog. Biblical warnings against apostasy are warnings to those who have “professed faith” without ever having truly exercised genuine faith. One who takes the road of apostasy only gives evidence of past pretension.

(4) A fourth objection to eternal security has to do with one’s interpretation of Hebrews 6. Those who oppose eternal security contend the passage teaches the possibility one can lose their salvation. If one uses Hebrews 6 as an argument that one can lose their salvation, they must also affirm that one who does can never be saved again (Heb. 6:4-6). While it is not the intent to exegete this passage here, suffice it to say that Hebrews 6 properly understood in its context addresses rewards, not the possibility of one losing their salvation. While it is admitted the passage has at least six interpretations, a good rule to follow: if two passages appear to be in conflict, and one is clear while the other is not, it must be assumed that since they are both true, the unclear can only have a meaning which is compatible with the clear. This limits the range of meaning the unclear could potentially have, and the end result is that you interpret the unclear in light of the clear. Clear passages of Scripture must always be the bright stars that guide one to seeking an understanding of passages like Hebrews 6 that are often difficult to interpret (2 Peter 3:15-17). And there are many bright stars found shining within the pages of Scripture that clearly illuminate one’s path in regard to eternal security.

While the above are some main objections to eternal security, there are many scriptures that shine brightly with the light of affirmation. Four have been chosen which clearly affirm eternal security.

(1) The brightest star in the scriptures which shines the rays of heavenly light on the doctrine of eternal security is found in John 10:28. Jesus said, “And I give unto them eternal life; and they shall never perish, neither shall any man pluck them out of my hand.” In the Greek, found in the declaration of Jesus to those whom He gives eternal life shall “never perish,” is what is called an Emphatic Negation. An understanding of Emphatic Negation reveals great riches within the text. When you have in the Greek the negative particles οὐ µή (ou mē) (both words are translated as ‘no’) in combination, it is emphatically declaring that an event cannot, will not, no way will it happen, by no means under any conditions will it ever occur. When an Emphatic Negation is found in a sentence it means that what is being talked about will never under any circumstance happen now or at any time in the future. An Emphatic Negation denies even the potential of it happening! When Jesus says “never perish” He is emphatically saying, “They will never, never, no they will never under any circumstances, there is not the even the slightest possibility or the potential of it happening now or in the future, that they will ever perish.” What assurance that gives to those who have trusted Christ.

(3) Paul uses an Emphatic Negation in Romans 4:7-8 when he writes, “Blessed are they whose iniquities are forgiven, and whose sins are covered. Blessed is the man to whom the Lord will not impute [count] sin.” By using an Emphatic Negation in verse 8, Paul is saying of the man who places their trust in Christ that “no never, never, under any circumstances, there is not even the slightest possibility or the potential of it happening now or in the future that the Lord will count man’s sin against him.”

(4) Peter uses an Emphatic Negation in I Peter 2:6 when he writes, “Wherefore also it is contained in the scripture, Behold, I lay in Sion a chief corner stone, elect, precious: and he that believeth on him shall not be confounded (literally, “one who is put to shame, one who who suffers a repulse, or whom some hope has deceived.” Peter by using the Emphatic Negation assures his readers who have trusted Christ that they will “never, never, under any circumstances, there is not even the slightest possibility or potential of it every occurring now or in the future that they will be brought to shame or deceived of the hope they have in Christ.

While more verses could be cited, just these fours verses of Emphatic Negation are sturdy tent stakes which anchor our souls in the eternal security of God’s divine grace. How could one interpret those four verses any other way than a believer’s salvation is eternally secure? These four verses are shining stars which cast sufficient light on the truth of eternal security as more than a product of man’s imaginative interpretation, but is anchored in the very teachings of Jesus and the Apostles. Rather than being a doctrine that gives license to sin, it instills encouragement, commitment and confidence in the heart of the believer knowing that God’s amazing grace in Jesus Christ is sufficient to save and secure those who trust in Christ. In Christ we are secure now and forever. Amen