As one dives into the treasure rich waters of the book of Nehemiah one soon discovers the truths contained within its pages are as fresh as the morning newspaper. Nehemiah was a remarkable man from whom we can glean many golden nu 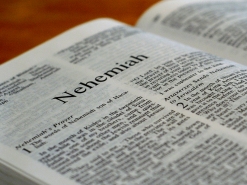 ggets of truth that are much needed today in circles of Christendom. Unfortunately, many today are unfamiliar with this charismatic man and the timeless truths found within his memoirs. It would be wise to revisit his architectural personality. He was not only a man who oversaw the rebuilding of the walls of Jerusalem, he sought to be a builder in the lives of others.

Nehemiah is securely nestled in the Old Testament after the Book of Ezra. We meet Nehemiah in 445 BC, as he is serving as cupbearer for the king of Persia. As cupbearer he would taste of the king’s wine and food before the king ate to ensure no poison had been injected in them. No wonder Nehemiah is always saying, “Long live the king!” When we are introduced to Nehemiah he is talking to his brother, Hanani, who has come from Judah with the news that the former exiled Jews who had returned to Jerusalem were in distress and the walls and gates of Jerusalem were still broken down. Walls represented security, protection, and safeguard against enemies. Without walls Jerusalem was vulnerable to outside forces.

Nehemiah upon hearing the news, could not shake the situation from his mind. He wanted to see those walls rebuilt. After praying about the situation for four months and gaining permission and blessing from the king, Nehemiah and his entourage made the 800-mile trip to Jerusalem to rebuild the walls and secure the city. One day he is cupbearer in the palace, the next day he was the governor of Judah managing a project that seemed impossible! His relentless persistence and organization skills resulted in 52 days seeing the project completed (Neh. 6:15). It was an extraordinary accomplishment. In digesting the memoirs of Nehemiah one can learn much about the type of man he was.

Just what kind of man was Nehemiah and what timeless lessons can we learn from him?

First, Nehemiah acknowledged God’s Sovereignty, yet he acknowledged man’s responsibility (Neh. 1). One truth is apparent throughout the book and in his prayers, is Nehemiah’s belief that God is sovereign in His dealings with man and in the universe. Nehemiah knew nothing takes God by surprise or will anything or anyone derail His ultimate plan being fulfilled. However, Nehemiah didn’t use God’s sovereignty as an excuse to sit back and do nothing. He saw himself as being responsible and being used in the grand scheme of God’s divine purpose. Nehemiah viewed God as active in the universe, and he wanted to be a part of God’s workings. Yes, God is sovereign, but He uses people to carry out His plans and purposes, we must decide if we want God to use us in the process of the unfolding of His divine will.

Second, Nehemiah relied on the power of prayer, yet He recognized the need for action (Neh. 1). Throughout his memoirs we see him praying at every encounter, circumstance or situation. He believed that prayer was necessary before embarking upon a task for the Lord, but he also believed one had to put feet to their prayers. Praying for the Walls to be repaired, required some action on the part of him. Praying for the walls to be built was good and a must, but there had to be some foot power that took place for it to become a reality. As a woman once said to this writer, “I believe in putting footsies to my prayers.” Nehemiah is a sound example of one who put footsies to his prayers. When threatened by his enemies he prayed for the Lord’s protection, then armed half the men with spears, shields, bows, and armor and the workers worked with a sword strapped to their side (Neh. 4:15-23)! Let us never use prayer as an excuse not to take action, but let us put footsies to our prayers.

Third, Nehemiah had a genuine passion to see the walls rebuilt, and his enthusiasm resulted in others catching his vision and sharing his passion (Neh. 2). The passion in his heart resulted in him traveling 800 miles to undertake the task to rebuild the walls. After  surveying the ruins, he shared passionately his vision with the priests, nobles and officials. He enthusiastic presentation, ignited a fire in the hearts of those with whom he shared, and they got on board and began the work (Neh. 2). We can’t expect others to embrace the dreams and goals the Lord has placed in our hearts if we are not enthusiastic ourselves. Interestingly, the word enthusiasm comes from two Geek words that means “possessed of God.” Ralph Waldo Emerson once said, “Nothing great was ever achieved without first enthusiasm.” Nehemiah and his team prove the truth of Emerson’s statement.

Fourth, Nehemiah was a superb administrator and organizer, yet he didn’t mind getting his hands dirty (Neh. 5:16). He organized the workers and gave all the teams working on the walls certain assignments which required painstaking effort and getting the hands dirty (Neh. 3). Nehemiah didn’t dictate what everyone was to do and then sit and watch everyone else work. He not only organized the project, he got in there and worked side by side with everyone. He got his hands dirty just like everyone else. A true leader is not one who simply delegates what needs to be done, but is out leading the charge to see that the task is completed successfully. Leaders in the mold of Nehemiah are willing to get their hands dirty.

Fifth,  Nehemiah faced severe opposition, yet he never lost his focus (Neh. 6). Before Nehemiah even started the work he faced opposition from the likes of men like Sanballat, Tobiah, and Geshem, who sought to halt the work before it ever got off the ground. Then once the work started, they did all they could to halt the work (Neh. 2:22). Despite the opposition, Nehemiah never lost focus of the task at hand. He told his enemies, “I am doing a great work, I don’t have time be to be distracted by your detours” (Neh. 6:3). In spite of the persistence of the opposition, Nehemiah kept steam rolling down the track toward success. Too often when we endeavor to do a work for the Lord we pack it in at the first little opposition that pops up. The devil seeks to get us sidetracked, but to accomplish anything for the Lord requires remaining focused on the task at hand.

Sixth, when Nehemiah perceived discouragement among the people, he infused encouragement into the equation (Neh. 4, 6). As the work proceeded the workers got discouraged, Nehemiah was the kind of leader who refused to be overtaken by negative emotions, but sought to encourage them through the words he spoke and his presence among them. One who is an encourager can’t adopt a “down in the mouth” vocabulary, but must use words of positive reinforcement to instill “finishing energy” within those being ministering, too. As well, the ministry of presence is of invaluable aid in helping someone overcome discouragement. Our presence in someones life can’t be emphasized enough as to its support and the infusion of strength to continue on in the task.

Seventh, Nehemiah demanded Scriptural obedience from the people, and he set the example by living obediently before them (Neh. 10, 12) He didn’t teach by word only, but by his daily example . He didn’t say to them, “Do as I say, not as I do.” No, Nehemiah could say, “Do as I do.” Nehemiah didn’t tolerate sin in his own life, and he didn’t tolerate it in the lives of others. He was not like many today who compromise with sin and tolerate it. He was consistent in his voice against that which dishonored the Lord, and he was courageous in his actions in dealing with it. He threw Tobiah out on his ear when he found out he was living in a storeroom near the temple formerly used to store the grain offerings, incense and temple articles. He also locked the city gates so the people couldn’t go out and work on the Sabbath, and even tore hair out of the scalp of those who defied God’s commands…and then turned around and prayed for them (Neh. 13:25-29)! Nehemiah never asked them to live a life he himself refused to live. How can we ask others to obey in biblical areas that we ourselves are unwilling to be obedient? We can’t hold others to a higher standard of dedication to the Lord if we refuse to hold ourselves to the same standard. Nehemiah could scold others for being disobedient, because he set the example in the matters of which he spoke. We must do the same.

From Nehemiah these are seven timeless truths, among many, that are discovered within the inspired pages of the book that bears his name. Some key words that describe Nehemiah are faith, prayer, obedience, action, skill, tenacity and focused.
In a day of where compromise abounds, tolerance of actions and attitudes no matter how unscriptural they are, quitting when a little opposition arises, endeavors undertaken without passion, and prayer is neglected as the foundation of all endeavors, we need in Christendom more in the mold of Nehemiah. Oh, may his tribe increase.

One thought on “TIMELESS LESSONS FROM NEHEMIAH”