One would have to be living in a cave if they aren’t familiar with the news involving Kim Davis, who has found herself in a Kentucky jail because she has refused to issue 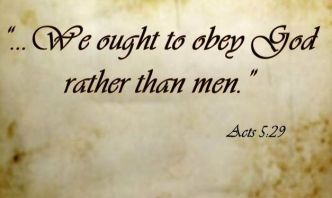 marriage licenses to gay couples even though the U.S. Supreme Court has legalized gay marriage nationwide. There appears to be two camps in regard to the Kim Davis saga. The first being, if she Biblically believes that gay marriage is wrong she has that right, but since it is now law she should resign. If her convictions will not allow her to issue marriage licenses to gay couples then step down from the job. To not do so is an act of civil disobedience.

We find in the Bible Daniel, a government official, engaged in civil disobedience when he was found praying after a law was passed he could not pray. He prayed anyway. The three Hebrew children, also government officials, engaged in civil disobedience when they refused to bow down to the image of Nebuchadnezzar which was a law. It cost Daniel being thrown in the Lion’s Den and it cost the three Hebrew children being thrown in the fiery furnace. Standing up against an unjust law sometimes is costly, but stand one must.

Peter didn’t quit preaching the Gospel even though authorities told him it was against the law. He replied to authorities, “We must obey God rather than man.” Many Christians in the days of the Roman Empire were put to death because they engaged in civil disobedience by refusing to declare that Caesar was Lord. One could believe anything they desired as long as they declared once a year Caesar was Lord. The Christian could not do that as only Jesus was their Lord.

Engaging in civil disobedience is hard for an unbeliever or liberal to understand seeing that their first allegiance is to the government regardless of the unjustness or immoralness of the law and don’t adhere to a Higher Law.  A Christian’s first allegiance is to the Lord Jesus Christ and as Peter said, “We must obey God rather than man  when man’s law contradicts God’s law.” The Christian knows that there is a Higher Law that transcends the ever changing laws of man. And when the two collide the Christian must choose the Higher Law of God. While not all our Forefathers where Christians, they understood there was a Higher Law. In a letter John Adams wrote to Thomas Jefferson on June 28, 1813, Adams stated, “The general principles on which the father’s achieved independence were the general principles of Christianity…and the general principles of English and American liberty…Now I will avow, that I then believed and now believe that those general principles of Christianity are as eternal and immutable as the existence and attributes of God; and that those principles of liberty are as unalterable as human nature and our terrestrial, mundane system.”

The secular godless crowd screams we can’t have any Christian morality undergirding society. Someone’s morality will be the foundation of society, and it is much better it continue to be the morality of our Forefathers who drew their moral principles from Christianity, rather than it be the ever changing immorality of the godless secular humanists whose principles lead to chaos, destruction and the death of an orderly society. The principles of our Forefathers made us the greatest nation on earth, while the principles of the secular humanists are destroying the moral and spiritual fiber of this once strong nation.

But let me say, I believe the issue with Kim Davis pictures a bigger issue that is on the horizon. There is a much bigger issue at stake here that is coming as this county moves further and further away for its Judeo-Christian foundation. The gay agenda is not satisfied that their unnatural and unbiblical union has been sanctioned as normal and equal to a  marriage between a man and woman. Their ultimate goal is to enact laws that will silence the Church and any Christian person who dare speak out against it as other than being normal. The bigger picture is that the day is fast coming when it will be against the law for a minister to preach that homosexuality is a sin as the Bible clearly states, and in the near future it will be against the law if a minister does not perform a gay marriage when asked to do so. The penalty will be a fine or jail, or both.

The whole structure of our society today is being attacked and destroyed. It is being given an entirely opposite foundation which gives entirely opposite results. Get ready my Christian friend, if the spiritual and moral atmosphere of this nation doesn’t change we are going to have to make a choice whether we will obey God or the godless laws of man. It is my earnest prayer we will say with Peter, “We must obey God rather than man.”

One thought on “THE CHRISTIAN’S FIRST ALLEGIANCE”