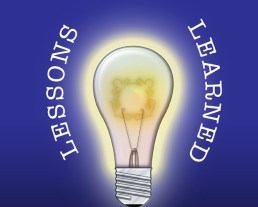 I recently celebrated my sixty-third birthday. Age doesn’t necessarily make you wiser, but after three-score and three years even those with the hardest heads should become a little wiser from the wear and tear. Let me share with you a few truths I have learned in the living of life.

I’ve learned life is a precious gift given to us by our Creator and we are to treasure each and every second we have been granted.

I’ve learned that the Lord speaks to our hearts everyday if we but have a desire and sensitive ears to hear His whispering Voice.

I’ve learned that the Creator has revealed Himself in Jesus Christ and in Christ He Himself in holy-love paid the debt we owe for not living up to His holy requirements. What God did in the Christ of the Cross is called grace – amazing grace.

I’ve learned there is no such person as a true atheist. Each of us have been created with an innate voice that there is a God. Those who seek to silence His voice or dismiss His voice do so because they want to be their own god and divorce themselves from the fact they must someday give an account to Him for their lives.

I’ve learned that there are consequences to our decisions and choices, whether good or bad.

I’ve learned that when one works hard, rewards will follow. I realize that goes against the entitlement mentality of  today that says, “I deserve it whether I have worked for it or not.”

I’ve learned if you spend more than you make you will go in debt. It is a shame politicians haven’t learned that principle.

I’ve have learned that you don’t create wealth by dividing it. That is the thinking of socialism, which destroys initiative and incentive. Why work to achieve if it is going to be taken from you to give to someone who thinks it’s their right to have what you have without earning it.

I’ve learned that a smile is contagious.

I’ve learned that there is a difference between knowledge and wisdom. Knowledgeable men are not always wise. Wisdom is the ability to use knowledge rightly.

I’ve learned that what is truly valuable in life has nothing to do with money.

I’ve learned that everyone we meet is experiencing some pain or problem, so try to be nice and brighten their day.

I’ve learned that to have friends you must show yourself friendly.

I’ve learned that laughter is a gift that adds music to the soul and is medicine for the spirit.

I’ve learned that unforgiveness will eat away at your soul and short circuit your relationship will others and the Creator.

I’ve learned that happiness is found in being “other oriented” not being selfish. We have no greater privilege than to invest in the lives of others.

I’ve learned you cannot ever compromise with evil. If you do, it will eventually destroy you and make a fool out of you.

I’ve learned that many waters cannot quench love. Life is short so if you are going to tell someone you love them do it before it is too late.

I’ve learned that if you take care of your health it will sooner or later pay dividends. I have sought to be an active runner for 50 years, and I do believe one of the reasons I have done so well in my battle with prostate cancer is because of my health. As I have heard many say as the years piled up, “If I had known I was gonna live this long I would have taken better care of myself!”

I’ve learned that it is ok for a grown man to cry and show his emotions.

I’ve learned that moral, theological, and political liberalism are destructive to the family, society and the church. The “transformation” that liberalism has brought to the USA has severely weakened us as a nation.

I’ve learned to be thankful for my blessings and to be trusting in my adversity. Our disappointments in reality are His-appointments.

I’ve learned without any doubt whatsoever that the Bible is the Inspired Word of God, and is our road map for living and our road map on how to get to heaven. The Word  has proven itself over and over in my life to be true.

I’ve learned like the German Reformer Martin Luther, “My conscience is captive to the Word of God. Here I stand. I can do no other.” I have come too far to turn back now and have no intentions to do so.

I could go on and on of truths and principles I have learned over the years, but I will end with the greatest truth I have ever learned.  I’ve learned that man is sinner. While we don’t all sin alike, we have all have sinned and come short of the glory of God. The remedy for our sin is the One who was above sin but died for our sins – Jesus Christ.

2 thoughts on “TRUTHS I HAVE LEARNED”