Last night I lost a dear friend. My heart is broken. No words can describe how much I will miss my friend. He always saw the best in me, always was happy to see me, and I could never do anything to make him disloyal to me. What a friend! His name was BoBo. He was 13 years old. He was a true companion. He without a doubt could be called “man’s best friend.” BoBo was my dog. He had to be put to sleep as the result of being hit by a car. I am not ashamed to say I cried like a baby. 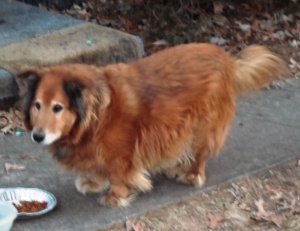 I am not sure if I adopted BoBo or he adopted me. Let me explain. When we moved to where we now reside, our neighbors who lived across the road had just gotten a little puppy. Someone had dumped him off on them. What kind of dog he was I am not sure, but it was obvious he was a crossbreed. He had short legs but it was evident he had some Golden Retriever in him. It didn’t take me long to fall in love with BoBo. He had a pleasant personality and loved being around people and enjoyed being patted and brushed. His owners were an elderly couple and were unable to give him the attention a dog needs, so very time I stepped outside he would run over to our yard. I always welcomed his visits, which were rewarded with dog bones, a pat on the head, and a conversation with him. His visits become more and more frequent.

Our neighbors expressed their appreciation for helping look after him. When BoBo was two years old, sadly, death visited the couple’s home, robbing the wife of her husband. From that day forward Bobo stayed at our house 24 out of 24 hours of everyday. She would call now and then to ask about him and always expressed gratitude for our looking after him since she was unable to do so.

BoBo loved like I wish I could. He never met a stranger. He always warned us when a car pulled in the driveway by barking, but he would greet the guest with a wagging tail and would escort them to the door. When my wife and I would approach the driveway he would always joyfully bark when he saw us and excitedly trot beside the car until it came to a stop. When the car door was opened he greeted us with gleam in his eye, a wagging tail, and waited for us to speak to him. He always ushered us to the front door. When I was outside BoBo would never leave my side.

BoBo loved it when the kids I coach would come over. They always loved on him and he enjoyed every minute of it. When they would roll my yard each November, at the end of cross country season, they would tell me Bobo always helped them. I don’t doubt it. He would also help me clean up the yard, but he seemed to have a smirk on his face all the while!

Our grandsons loved BoBo, too. When they would visit they would hug him, lay on him and at times were probably a little rougher with him than they should have been. But it mattered not what they did to him,  BoBo gladly took it. He enjoyed the attention and I believe he even egged it on a bit. When talking on the phone with the grandkids they would always ask, “How is BoBo?” He had endeared himself to them.

He loved being brushed. His eyes would light up and he’d wag his bushy tail gleefully. When I would stop he would take his nose and put it under my hand seeking to place it back on him. He knew when he had a good thing going. It was as if he was saying, “Just one more time.” I always did as he requested.

As the picture shows, BoBo was overweight. He liked to eat. I asked a vet once how much weight Bobo needed to lose. His reply was, “About a dog!” I tried to cut back on his food but it didn’t seem to help much. If he got too hungry he would come to the front door and bark. Being the old softy that I am I would feed him. He did get some exercise, though. He was very territorial about other critters coming in the yard. If a squirrel, a cat, or another dog came in the yard he would try to chase it away. It was funny watching him, for everything he chased was faster than his short little legs could carry him. Once the strange critter was out of sight he would always trot back to where I was and look up at me as if to say, “See what I did?” I would tell him, “Good job.”

Only on rare occasions did I have to scold him. He liked to dig in a particular spot in the yard. Why that one spot I don’t know, but I never could get grass to grow there because he would scratch it up before it could fully grow back. When I would reprimand him about it he would look up at me with the most pitiful eyes as if to say, “I am sorry, I promise not to do that again.” The look in his eyes made me feel bad I had spoken harshly to him.

With each passing year BoBo got feebler. He had arthritis which in the winter made it more difficult for him to get around. On cold days it took a little more effort for him to get up and he would hobble around for a bit before working out the kinks. If it got unusually cold we would let him inside, but most of the time he slept in the garage. In the summer he liked sleeping under the shrubs in the front yard where it was cooler.

BoBo was more than just a dog, he was a good listener. I could tell him secrets and I had no fear that it would be repeated. When I thought out loud BoBo would look up at me like he understood. I could share with him “stuff” out of my past and he never thought less of me. He had unconditional love for me and I for him. I only wish, no I pray, that someday I can be the wonderful person BoBo thought I was. I am gonna miss him. I will miss his bark. I will miss his friendly greeting every time I pull in the driveway. I will miss his twinkling eyes when I talked to him. I will miss the love he shared expecting nothing in return…but receiving in return loving attention.

A true friend is hard to find, easy to love, sees the best in us when we are at our worst, impossible to replace and can never be forgotten. Yep, that describes the kind of friend  BoBo was.

I will miss my friend.

One thought on “SAYING GOOD-BYE TO A DEAR FRIEND”