At the end of a seemingly uneventful summer day, Britain’s King George III wrote the day’s activities in his diary: “July 4, 1776. Nothing happened today.” Oh, how mistaken he was! Something did happen that day. Fifty-six brave men pledged their lives to each other and signed their names to the Declaration of Independence. The United States of America was born. 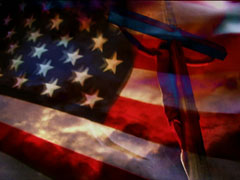 As the nation pauses on July 4th to celebrate its 238th birthday, we must ask if we are keeping alive the fires of freedom and respect for life and human dignity inherent in the ideals of our Founding Fathers. Are we still standing for the principles on which they stood and upon which this nation was built? We should think, not so much about the freedom from tyranny that our ancestors won, as about the chaos that freedom can bring to those who do not use it wisely. When we begin to dismiss all moral restraints from our lives and society, as we see taking place across our land today, we are headed for trouble and eventual collapse.

John Adams, a signer of the Declaration of Independence and our second President, wisely wrote in 1798, “We have no government armed with power capable of contending with human passions unbridled by morality and religion.” Yet in the day and hour in which we live we continue to cut the cords of morality and spirituality and expect to experience Heaven’s blessings. Instead of blessings we have become enslaved by a misconception of what constitutes freedom.

In our nation we need to look at some of the ugly results from the misuse and abuse of freedom: abortion, erosion of the definition of marriage, rampant crime, alcoholism, drug abuse, deadly violence in our schools, moral perversion, child abuse, and the list goes on. Do not those things stem from a distorted concept of freedom? Sadly, it will lead people to become weak and enslaved. When freedom becomes a license for people to disregard moral and spiritual values, dismissal from society the God of the Bible, a shifting of responsibility for our actions and an entitlement mentality, then it is no longer freedom, but bondage.

Peter speaks of the outcome of those who misuse and abuse freedom. He wrote, “While they promise them liberty, they themselves are slaves of corruption; for by whom a person is overcome, by him also he is brought into bondage” (2 Peter 2:19). Freedom separated from the twin-tracks of the Lord’s moral restraints and His life giving principles leads to a moral and spiritual train wreck. George Washington declared in 1796 at his Farewell Address that the twin pillars of faith and morality are the secret to  “political prosperity” and “human happiness.”  That has not changed.

True freedom is not a license to do as we please with disregard to God and our fellowman. True freedom is found in living as He intended us to live,  serving “Him without fear, in holiness and righteousness before Him, all the days of our life” (Lk 1:74-75).  When we forget that truth we are abusing freedom. And it is only in Jesus that we have the power to truly live free; to live in His power that enables us to live in the freedom of  His holiness and righteousness. Jesus said, “If the Son of Man make you free you shall be free indeed” (Jh 8:36). True freedom is found at the foot of the cross, which alone needs to be our nation’s true magnetic North. Instead of removing the cross from the landscape of our society, we need to run to it as fast as we can and kneel in repentance.

Independence Day is a time we pause to remember those brave men and women who made the choice to shake off the shackles of political tyranny. It resulted in freedom flowing like a might river throughout the thirteen colonies. Let us remember this when we see the flag we love waving in the sky. And let us seek to follow in the steps of those brave Americans who died so that it could fly. But above all, let us remember towering over the unfurled USA flag stands the Christ of the cross who alone can give us freedom and power, even in the face of the spiritual and moral declension, to live as we ought to live in holiness and righteousness before Him all the days of our lives.

And “if the Son of Man make you free you shall be free indeed.” Now that is true freedom.