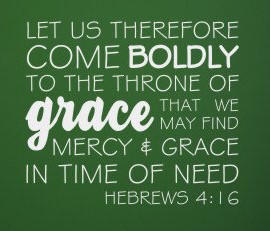 I have always loved (maybe even an obsession) studying the origination of the meaning of words, especially Greek words, the language in which the New Testament was written. Studying the etymology of a word and how it developed in meaning over time proves to be most profitable, as it sheds brighter light upon its meaning and opens up the depth and richness contained within that would otherwise not be known. Often times when translating from one language to another it is difficult to find an equivalent word, and many times the word chosen doesn’t reveal the richness contained in the original word.

In meditating on Hebrews 4:16 recently, one word in the verse leaped out at me, which required further digging into its meaning.   The verse reads, “Let us therefore come boldly unto the throne of grace, that we may obtain mercy, and find grace to help in time of need” (KJV). In the uncertain hour of our day, it is a verse that gives great strength and encouragement. The word that leaped out at me was the word “boldly.”  The Greek word is παρρησία (parrhésia) (par-rhay-see’-ah), which is translated in other places in the Bible as “confidence” (Acts 28:31; Eph 3:12; Heb. 10:35; I John 2:28, 3:21, 4:17; 5:14). The much respected ESV translates parrhésia in Hebrews 4:16 as “confidence” which is most appropriate.  It might be added, in the NT parrhésia is found 31 times and is sometimes translated “bold,” “boldly,” “openly,” or “confidence.”

When we look at the etymology of the word parrhésia it opens up a vein of golden nuggets of truth that adds value to its meaning and encouragement for our souls.

Παρρησία (parrhésia) comes from two Greek words, one  meaning “all or everything” and the other “utterance or speech.” It literally means “to say everything.”  Originally the word had political connotations in 5th century BC Athens to describe the freedom of speech Greek citizens of Athenian democracy enjoyed. It was one of the highest privileges of a full citizen who was granted the right to speak with frankness without fear. The word meant “the absence of fear when speaking; speaking with boldness, frankness, openness, assurance and courage” (Donald Burdick, Letters of John the Apostle, Chicago: Moody, 1985, 208-9).

Parrhesia also was used in the philosophical realm to describe the words spoken by a Hellenistic philosopher, that what he was saying he was speaking with assurance that it was the truth. The word “parrhesia” was used to refer to the relationship between the speaker and what he spoke.  For a Greek philosopher the connection between belief and truth took place in the verbal activity of speaking with such assurance and confidence that it left no doubts about his own personal possession of the truth. His boldness in speaking presupposed his own possession of the truth and in his words was conveying such truth to others (Theologica, Vol. 6 No. 2 (2016), 91).

Over time the word shifted from a political and philosophical emphasis to refer to the words spoken between friends. Parrhesia was “the entire freedom with which intimate friends unburdened their hearts to one another” (Curtis Vaughan, 1, 2, 3 John, Zondervan, 1970, 69).  It referred to friends having the courage, boldness, and freedom to say with openness and frankness what needed to be said to one another because of the relationship between them. Parrhesia was linked to courage and openness in one’s speech in truth based upon the abiding relationship of the individuals.

Understanding the richness of these meanings illuminates what it means to come “boldly” to the throne of grace. Hebrews 4:16 tells us that you and I have the liberty, courage, boldness, to speak with an openness far greater than that granted to an Athenian citizen, far greater than a Hellenistic philosopher delivering a discourse, far greater than close friends sharing intimate details…but we can have the privilege to not only speak but to speak freely, openly, confidently and boldly to the holy God of the universe because of the personal relationship we have with Him!!   How can that be?

Before Christ died and entered into heaven, there was no such freedom to speak freely, openly and boldly before the throne of grace. Man had no offering which he could bring that would make him acceptable to God or allow him access to the Father. But now the way has been open. Because of Christ’s work on the cross, we now have boldness of speech to do so.  Access is now free for all who have trusted Christ, that we might come with the freedom, openness, courage, boldness and confidence before the throne of grace.  In the OT entrance into the most holy place was forbidden to all but the high priest; but now access to the real “holy of holies” has been granted to all in the name of our great High Priest, Jesus Christ.  We are now invited to come and bring our petitions, our heart cries, our every need. We don’t have to come timidly, but we rest in confidence upon the truth of Christ’s work on the cross which grants us liberty to speak freely, boldly, with courage, with confidence before the throne of grace.  It defies comprehension, but we are even invited to do so, “come” the verse says. Wow!

Robert Milligan expresses the verse well: “The mind of the writer and readers are full of the imagery of the Levitical system, and of the ceremonial of the high-priestly atonement; and the form of the exhortation suggests the grandeur of the position in which the Christian is placed, as compared with that of the Jew; ‘let us therefore,’ trusting the divine power and human sympathy of Jesus the Son of God, ‘draw near,’ as priests ourselves in fellowship with our High Priest – and not remain standing afar off as the congregation of Israel – ‘to the throne of grace,’ no symbolic mercy seat, but the very center of divine sovereignty and love” (Milligan, New Testament Commentary, Epistle to the Hebrews, Nashville, 1962, 148).

What encouragement and rejoicing that should bring to our hearts, that anytime from anyplace we may approach with παρῥησιας, with freedom, openness, confidence, liberty of speech, in contrast to the fear and trembling of the Jewish high priest. Because of Christ’s finished work on Calvary nothing is to be feared, providing our heart is in relationship with Him, we can present our requests with joyful confidence and with the bold assurance that we will find grace to help us in time of need. Having now boldness and liberty to enter the holiest by the blood of Jesus, let with confidence in that truth come before Him continually knowing His grace is ever available to aid us.

Yes, the use of the word parrhesia was used by the writer of Hebrews to give us encouragement to come freely and confidently to God in prayer. What a privilege we have been gifted.   Have you and I been to the throne of grace today? We have a standing invitation to do so….and to do so boldly!

One thought on “COME BOLDLY TO THE THRONE OF GRACE!”